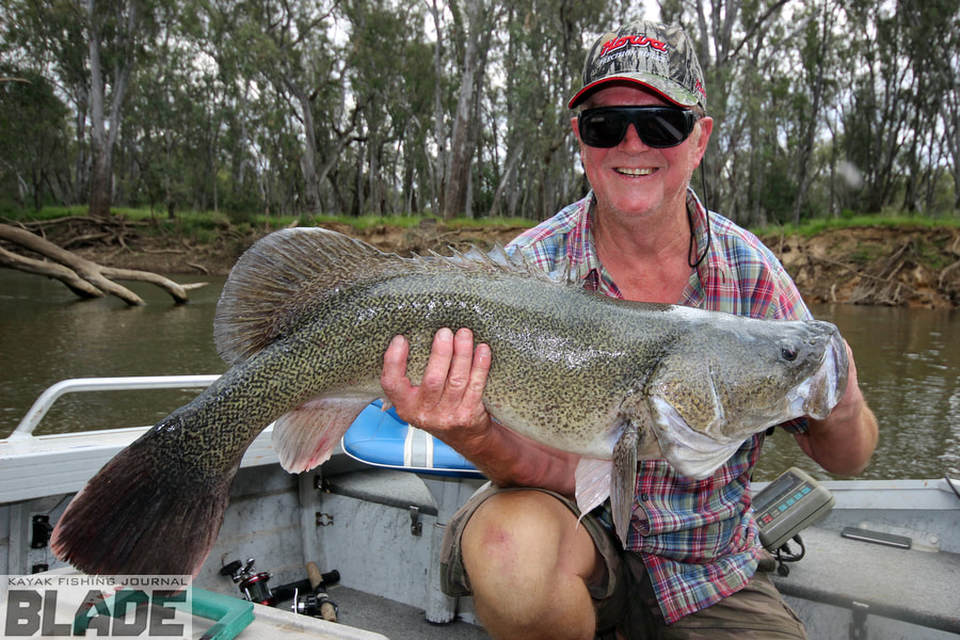 Sunday 4th December, just four days into the new Murray cod season and there were storms in the weather forecast. My best mate Sandy “The camo man” Hector had contacted me, suggesting we go fishing in a local small lake for redfin. I told Sandy my instincts were telling me to go cod fishing as there were forecast storms following a hot day, with an increasing northerly wind. Excellent conditions for Murray cod in my opinion. I have found over the years that Murray cod tend to switch on and off the bite much more quickly than redfin, which seem to not be as affected by the changing barometer or weather. Therefore after a bit of discussion, Sandy and I elected to go kayak fishing for Murray cod in the lower Ovens River, and maybe chase some redfin later in the week after the wind change.

I arrived at our chosen destination a bit earlier than Sandy and went for a swim in the river while waiting for him. I tend to do this a bit …I am pretty sure that I have some Labrador D.N.A. in me somewhere. After swimming I set up my kayak ready to go fishing. This was to be the maiden voyage for my new kayak, a Safari H20 “Murray”. It’s the exact same model as my last kayak but with a couple of modifications. Before long Sandy arrived and quickly started setting up his kayak, an older Dagger Drifter which he bought from me about 10 years ago.
Just as we were about to leave Sandy asked me “You haven’t got a spare fishing rod by any chance have you?” Seriously, Sandy is the most organised person in the whole world. He is a true control freak by every extent of the meaning, and he had forgotten the most important piece of equipment, his fishing rod. Even if he brought the rod and forgot the kayak we could have fished off the bank!

Before we had a chance to stress, worry or devise a ‘rod sharing’ plan for the evening a lovely shiny white boat slowly motored around the corner…my dad! No jokes, my old man just happened to be fishing at the same spot we were, and best of all, he had a boat full of fishing rods.
After a quick chat dad left and went fishing, leaving Sandy with one of his fishing rods. It was then that Sandy had a thought: “Oh hang on…I have got a spare rod in my kayak, I always carry a spare rod up behind the seat.” So Sandy took dad’s reel and placed it on his spare rod, a three piece Shimano raider rod. Now we were finally organised so we launched and got going.

Within five minutes of being on the water, and probably no more than a dozen casts each we could hear a boat coming up the river with someone shouting. “Robbie, Robbie, Robbie, get your camera.”

The karma train had just pulled up at the station and pounded dad with a big dose of positive karma to reward him for his generosity in loaning Sandy a fishing rod. A large Murray cod, well over 90cm long. Dad had just trolled his red Legend lure around the bend from where we launched and had landed this magnificent Murray cod within the first 20 metres of trolling. Well done dad!

Now, just a note on Karma…. The word karma is derived from the Hindu belief that what goes around comes around. Hindu belief is that the nicer you are now, the better your next life will be. If you are nasty now, you will be punished in your next life!
These days so many people use the word karma in a negative context, hoping something bad will happen to somebody that has done wrong by them. While this is a true derivative of the word karma, karma works equally as a positive as it does a negative. If you do good by people, you can get good karma and something good may happen to you. Sadly, in this era of negativity and materialism that we live in, most people only ever use the word karma in a negative context when hoping for revenge.

After a few photos, and some of my dad’s hilarious antics the fish went back in the drink and swam off beautifully. Dad was left with a cut finger. Not a real problem for most people, but not good for my dad as he in on blood thinning medication and would likely bleed for hours. Thankfully Sandy is a super organised individual (apart from his fishing rod) and carries a decent first aid kit. I think he stores it somewhere in the back of his kayak between his spare rod, three spare headlamps, three changes of clothes, a week’s supply of food, a dozen flares and a satellite phone!
Sandy opened his first aid kit and said to dad “I’ve got alcohol swabs” Dad replied “I’ve got alcohol too, but it’s in a can!” After a quick dose of an alcohol swab, a couple of bandaids and a few laughs, it was time to get back to the fishing.

Dad went downstream in his boat while Sandy and I went upstream. We paddled about 500 metres or so to a big deep hole, and within minutes I had hooked our first fish. A Murray cod of around 40cm long on a large #1 Stumpjumper in one of the new Compleat Angler exclusive colours.

The-first-Murray-cod-caught-between-Sandy-and-I-for-the-afternoon-taken-on-a-Stumpjumper-lure-cast-up-tight-against-the-bank-and-retrieved-back-towards-the-kayakAbout now it had started raining and it was super humid. The northerly wind had sprung up and there was thunder getting louder and louder. It wasn’t long before Sandy hooked his first fish, a similarly sized Murray cod of around 40cm in length. Sandy caught his on a purple JD superbug lure. With two fish on the board before we finished fishing the first hole, things were looking good.

We drifted downstream at a leisurely pace, casting our lures into the slow backwaters close to the edges of the river. I changed to a white Stumpjumper and caught another similarly sized Murray cod on the first cast with the new colour. Within minutes Sandy hooked and lost another small fish.
I then changed to a large Zerek paddle tail soft plastic and started sinking it close to some very large logs, hoping I could entice a big fish to strike…. just like dad’s! I pretty quickly hooked up, onto the smallest fish of the day on that Zerek paddle tail. It was a small Murray cod of around 30cm. The plan worked to an extent, but the fish wasn’t as big as I was hoping.

Over the next hour Sandy caught three more Murray cod, all undersize and around the 35-45cm mark. I caught one more, directly opposite the car as we drifted downstream. The last two hours of daylight produced nothing, not a single touch. This is normally prime time for Murray cod fishing, but ironically the action had been red hot earlier in the day during our first hour or two and then nothing. The front had past, the wind had swung around and the fish had just turned off.

We passed dad on his way back upstream. He said that he was going home as he wanted to pack his boat up before dark. He had caught one more fish, a protected trout cod of around 40cm. Sandy and I persevered. At sunset we both changed our lures to surface lures. I trolled my Koolabung surface lure most of the way back to the car. That’s a different technique I was sure would work. It is kayak trolling without the hassle of getting snagged!
I passed a lovely looking log jam, and just had to stop for a few casts. Within four or five casts my surface lure vanished from the top of the water column in a giant heart stopping swirl of water beside my kayak. After a short fight I landed a magnificent 85cm Murray cod. Not quite as big as dad’s, but still a bloody ripper!

I paddled across the river to a small sand bar and lowered the fish back into the river and climbed out of my kayak. As I was climbing out, this big fish gave an almighty kick and my 50lb braided line was unfortunately wrapped around the end of my rod and it snapped the rod into two. The top 5 inches was snapped off my beloved $500 Venom 6kg baitcaster rod. At the same time, the fish had dug a hook fair into my leg.

Now, I was standing next to a broken, top of the line, fishing rod with a hook in my leg and an 85cm Murray cod hanging off the same hook. I had to think quickly, so I pushed the hook all the way through my leg so that I could crimp the barb. It sounds harsh but I didn’t have many other options at the time and had to move quickly to sort this problem out. Rex Hunt had told me years ago that the best thing to do in this situation is pull it out as quickly as possible whilst still in shock and with the adrenalin pumping. So I whacked it through, crimped the barb on the hook and reversed it back through my leg as quickly as possible.

We then measured the fish, got a few photos and released is straight away. The fish gave an almighty kick which drenched me with water as a parting gift. The excitement of this magnificent fish far outweighed the drama that accompanied it and it certainly added some adrenalin to the story. It was now almost completely dark so we paddled back to the car and headed home, very excited!

For anybody wanting to see footage of this fish taking the lure, and the drama that followed, it can be found on my YouTube channel ‘robbiefishing’. The video is called ‘surface fishing for Murray cod, catching an 85cm Murray cod on a surface lure.’
The following Saturday, Sandy and I hooked back up for our postponed redfin fishing session where we managed to catch at least 40 redfin, keeping six nice fish around the 28-32cm size.

Murray cod kayak fishing tips:
*Always carry lip grips and pliers. Pliers are an essential tool and help to prevent you from becoming hooked up. In the event you do drive a hook into yourself, pliers will help you remove the offending item.

*If you hook yourself with a large Murray cod hook, move very quickly while you’re still in shock. Do not stop and think too much. If possible, push the hook through, crimp the barb and reverse it back through.

*When cod fishing, concentrate your casts on the steep banks with heaps of snags. If you’re not getting snagged you are fishing in the wrong spot!